Marcus Buckingham on Resiliency and What Really Makes a Leader 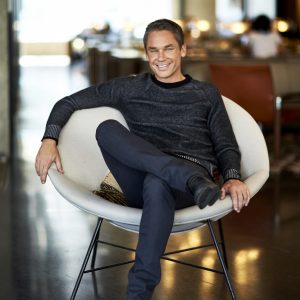 It’s a nice day in Southern California. Marcus Buckingham is using the phone interview as an opportunity to take a walk and enjoy the weather. It seems like perfect timing to explore the red thread concept.

The red thread idea is woven into Chapter 8: Work-Life Balance Matters Most. To be clear, “work-life matters most” is a lie. It is one of nine lies he and co-author Ashley Goodall debunk in their book, Nine Lies about Work: A Freethinking Leader’s Guide to the Real World. The nine chapters challenge fundamental “truisms” of the workplace that conflict with reality. “That is really problematic for us when we go to work because we’re living the lie,” he says.

The conversation turns toward red threads with a question about loving what you do. “You don’t need to love everything that you do but you do have to be super intentional in finding love in what you do,” he says. Activities that give you strength are your red threads, and they may be very different from your co-worker’s. Not every activity is a red thread. There likely is a spectrum woven into your workday. Based on research by the Mayo Clinic, the threshold is 20% red threads. Less than that and you risk burnout. More than 25% does not make a difference in resiliency.

Marcus offers a simple exercise to identify your red threads. Take a blank pad and draw a line down the middle with one column titled “love” and the other “loathe.” Keep it by your side for a week, jotting down anything that you are looking forward to, that you get immersed in, that flies by quickly, or “just clicks.” On the other side, catalogue the activities that you put off, that seem to drag on, that “when you are done with them, you are like an empty husk.” Many activities won’t fall in either bucket, but once you know what rejuvenates you, you can make a conscious effort to pursue those activities.

The conversation transitions to Chapter 9: Leadership Is a Thing. The authors argue that leadership is not, as commonly promoted in training programs, attributes that can be determined by tests and developed through training. “If you take the 10 best leaders you have ever met and examine them, or interview them, or study them, you find they are all different from one another,” Marcus says. “They don’t all have the same list of attributes; they don’t all have the same list of qualities; and to get better as a leader they don’t try to acquire the ones they don’t already have. The only thing they have in common as leaders is followers. A leader is one of those things that you are only if someone is following.”

Leaders became better by identifying the most authentic way to get people to follow them. He offers Martin Luther King Jr. as an example of an extraordinary leader. “His way of leadership was really different from Malcom X and JFK,” Marcus says. “He had a particular way of creating intensity and going toward those moments of crisis. For him, that is how you made progress. Incrementally, crisis by crisis by crisis. You define a line in the sand. You make it a flashpoint and then you do it again. That is a distinct way he had of leading, a courageous way. … He was a super intelligent version of him, and he wasn’t a very good version of Robert Kennedy or JFK.”

There isn’t enough time during the interview to discuss Chapters 1-7, let alone his two New York Times bestsellers or his work as a researcher or as founder of the Marcus Buckingham Company. Even briefly, though, listening to Marcus is a red thread experience. Marcus will share more insights in two half-hour sessions as the opening keynote speaker on Nov. 10 at CHIME20: Digital Recharge. For more information and to register, go here.